skip to main | skip to sidebar

This little pamphlet arrived inside a book I purchased at the local thrift store.  It is apparently one of a series put out by Western Electric - this is Volume XII, Number 2. I guess this was some kind of "Public Service" PR - it has nothing to do with any product they put out. 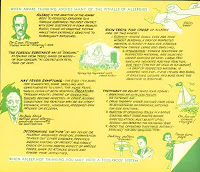 Western Electric on Wikipedia
Western Electric was founded in 1872.  They later became part of AT&T,  where they were responsible for manufacturing telephones for the Bell telephone conglomerate ("Ma" Bell).  Until the 1983 telephones had to be leased - many were marked "BELL SYSTEM PROPERTY—NOT FOR SALE."  On the upside, since Bell owned the phone they had to repair it for free, so they made them very dependable.  They developed Touch Tone dialing, as well as the Princess and Trimline telephone models. Western Electric was also pivotal in bringing sound to the movies, and were part owners of Bell Labs.

Western Electric was broken up during the Bell Telephone divestitures in the 1990's.
Posted by KnC Books at 12:33 PM

I have always been interested in the printed word - books, magazines, what-have-you. Ephemera is definitely in the "what have you" category.

The items shown here are those in my personal possession; gathered by me deliberately, or that have found me in their travels. I do not consider myself a collector, there is really no system or logic involved other than somehow the object holds an interest for me.

Hopefully you will find something here that interests you too!

Promote Your Page Too